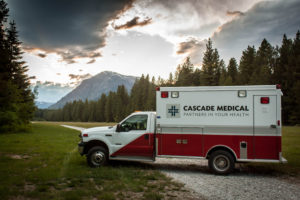 Under a new partnership with Cascade Medical, firefighters from Lake Wenatchee Fire & Rescue will be first to respond on all emergency medical calls from Plain to Stevens Pass.

The arrangement is meant to achieve two goals: Better efficiency and more consistent, round-the-clock staffing. About half of the fire department’s 35 volunteers are already certified as Emergency Medical Technicians (EMTs). Another 9 are in training, said Chief Mick Lamar.

“About 60-70 percent of our calls are EMS-related, whether it’s a motor vehicle accident, trauma, illness or rescue,” Lamar said. “The EMT training process is three months long, but our firefighters have seen the need for that level of training and have really taken the initiative.”

When someone calls 911 with an emergency medical situation in Plain, Lake Wenatchee or Stevens Pass, Rivercom will dispatch both Cascade Medical and Lake Wenatchee Fire & Rescue. Two volunteer firefighters with EMT training respond using a Cascade Medical ambulance parked at the station. Meanwhile, an advanced life support (ALS) crew from Cascade Medical begins the 25-40 minute drive toward the incident. First-responders consult with the ALS crew en route, and will call them off if they’re not needed.

In exchange for the staffing support, Cascade Medical will pay a portion of its Emergency Services levy to Lake Wenatchee Fire & Rescue. The contract was effective Jan. 1.

“The team at Lake Wenatchee Fire & Rescue have been terrific partners in helping us care for the communities we serve,” said Cascade Medical CEO Diane Blake. “We’re pleased to formalize that partnership, and we look forward to continuing to work closely together to meet the needs of our district residents and visitors.”

Chief Lamar described the partnership as an evolution over the last decade. Until the early 2000s, two volunteer EMTs, Gayle Macy and Cricket Hamilton, staffed the ambulance service. Over the last 15 years, Cascade Medical hired several on-call EMTs from the Lake Wenatchee-Plain area to operate the ambulance from their homes, including Richard “Duck” Novikoff, Michael Stanford, Chuck Kocher, Tim McElravy and Steve Saugen.

The ambulance has been housed at the fire station for about a year, which resulted in faster response times. But, maintaining adequate staffing for the ambulance service remained a challenge. At times, fire district volunteers with EMT certification picked up more shifts, prompting the need for a formal agreement between the two agencies.

“The goal is to get aid to the patients’ side in the most effective manner possible, and this partnership will accomplish that,” said Brian Pulse, Director of Emergency Medical Services. 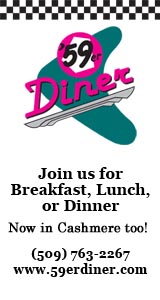