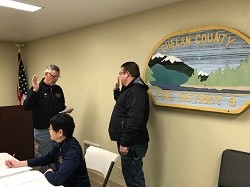 David Walker has been appointed Assistant Chief of Lake Wenatchee Fire and Rescue, replacing AC Bill Moffat who has retired from the position. He was sworn in to his new position on January 8th by LWFR Commissioner Rollie Schmitten. Walker began his fire career as a sixteen year old working on and around fire apparatus as an Explorer Scout in Bellevue. He went on to become a volunteer firefighter in Redmond until being hired as a full time firefighter in the City of Kirkland.  During his career there as a firefighter and EMT, he advanced to serve as Fire Marshal and Operations Battalion Chief. In those positions he was responsible for fire investigations, records management, national and regional deployments, apparatus design and purchasing and fire station construction. During those years he resided in Skagit County and served there also as both a fire commissioner and Fire Marshal of Skagit County, as president of  the Skagit County EMS council and interim director and commissioner of their hospital district. He has extensive training from the National Fire Academy in fire investigation, arson prevention and control, fire service finance and executive development. Dave retired in October 2018 and with his wife Katie and sons Elijah and Forrrest moved to the home they loved in the Butcher Creek area.  Welcome, Dave and family!